I was on the bike at 7am this morning and got off at 18:20. A long day in the saddle. The distance covered was 794km. A really long haul.

It was a lovely ride all the way. The first 94km were like the Sally Gap in Wicklow. Imagine that for a start. The roads broadened out and it was a pleasure to drive at a steady 110kph. The day starts damp and cold and changes to windy and clear around 10:30.

I paid my outstanding petrol bill from last Sunday on Ostersund. Fill up again there.

I met Stephan somewhere after 300k. He drives 10000k a year. He must never be off it when you consider the short motorcycle season up here. He had just put new Tyres on it. I asked did he do of road on it. He said no. It’s a1998 Kawasaki 750 and the seat was his first leather biker jacket he had when he was a teenager.

Other than that it’s been a driving day. The sun was out from around noon as I was heading south. I got a good bit of buffeting from the cross winds on occasions. 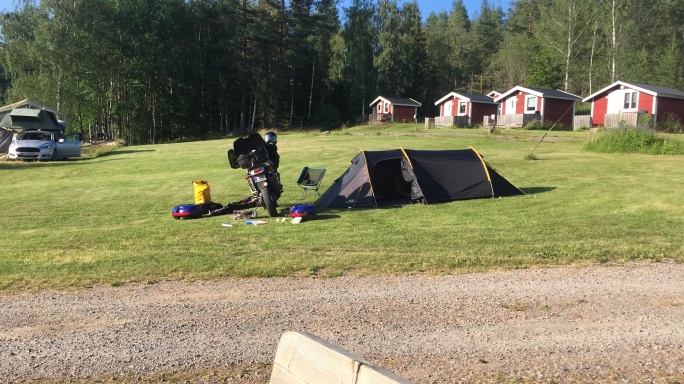 Great to put the dry tent up in a beautiful lakeside site. I’m up early tomorrow to catch a ferry. Good night