Woke to the pitter patter of rain on the tent and a dull throb in my head. A little too much malt the night before is good for that.

I have a system for packing up the tent in the rain. First thing pull the plug on the air bed so my weight will deflate it. Then get out of the sleeping bag, roll it up into its sack. Get the bike gear on. Pack the water proof bag and then dismantle the inner tent and fold it soit keeps dry. Lucky the huts in the camp park had a porch so all the gear was in a dry place while I took down the tent. Packing everything into the panniers I’m ready at 10:30.

Hop on the bike and five k up the road is Circle K. I got a spicy hot dog and coffee for breakfast.

The long and the short of the day on the bike, was it was a tough haul up to Bodø. The road is having major improvements and all the money is going into the new road. The old surface is very poor. It was almost off roading. I guess a 20% of the route was road works There was a detour and it rained till 5pm. A. Norwegian said he went from Trondheim and went through Sweden.

Something happened when I crossed into the Arctic. The fridge door was left open. The temperature drops and an icy cross wind nearly blew me off the bike. I hate cross winds. I was leaning into the wind for up to 20k up in a Saltfjelle. I didn’t like it one bit. I was doing my best to do 90kph.

I pulled in at the first petrol station to compose myself and get a coffee. Also the chain was dry and Scotoiler empty. I had to unpack the yellow bad take off a pannier take off the saddle and fill it. The set it to bleed. Pack everything back on the bike and repeat after 20k.

Got to the camping ground in Bodø at 7. I put up the wet tent and it dried quickly. Cooked dinner and spread everything out to see how the clothes situation was holding up. 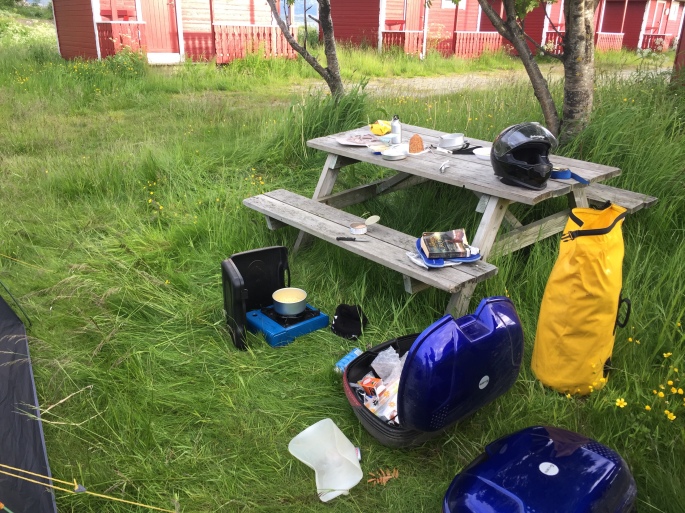 A cheerful woman was in a tent nearby and I would she join me for a malt. After she had prepared her food she would be over. she rented a car and was doing recommended walks and hikes. Traveling on her own. We had a wee drink and a chat and then did my blog.

I did my blog and it was nearly midnight. I put my fleece and hat and out to experience a marvelous wonder of nature. The sun was shining on the snow tipped mountains across the bay. It was a delight and to see. This was the reason for the trip and I’m delighted it wasn’t raining. I had a good look around in the midnight sun.

One thought on “Something happened”